The Dijkstra’s Algorithm starts with a source vertex ‘s‘ and explores the whole graph. We will use the following elements to compute the shortest paths –

Just like the other graph search algorithms, Dijkstra’s Algorithm is best understood by listing out the algorithm in a step-by-step process –

Let us understand this with the help of an example. Consider the graph below – 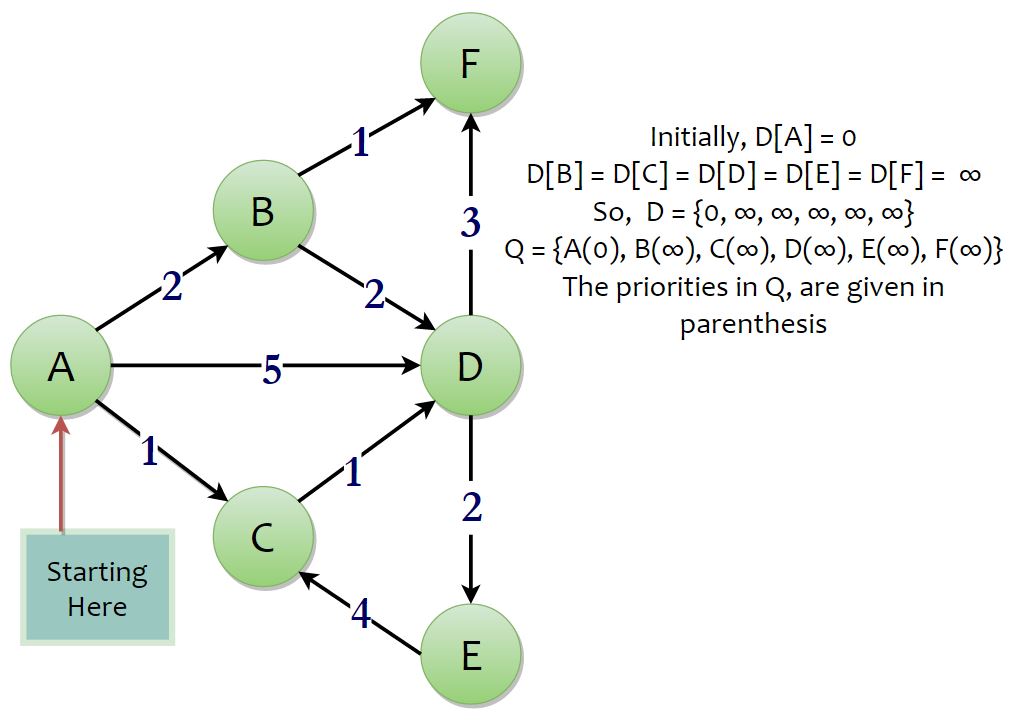 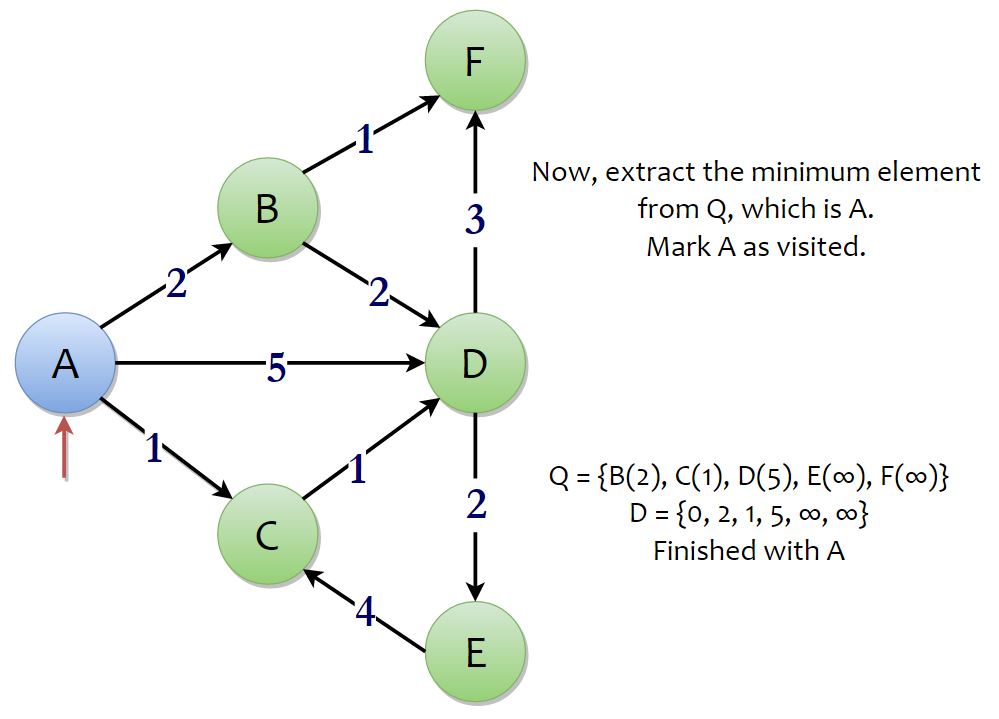 The minimum element in the priority queue will definitely be s (which is A here). Look at all the adjacent vertices of A. Vertices B, C, D are adjacent to A. We can go to B travelling the edge of weight 2, to C travelling an edge of weight 1, to D travelling an edge of weight 5. The values of D[B], D[C], D[D] are ∞ . We have found a new way of reaching them in 2, 1, 5 units respectively, which is less than ∞, hence a shorter path. This is what the if-condition mentioned above does. So, we update the values of D[B], D[C], D[D] and the priorities of B, C, D, in the priority queue. With this, we have finished processing the vertex A.

Now, the process continues to its next iteration and we extract the minimum element from the priority queue. The minimum element would be vertex C which would be having a priority of 1. Now, look at all the adjacent vertices to C. There’s vertex D. From C, it would take 1 unit of distance to reach D. But to reach C in prior, you need 1 more unit of distance. So, if you go to D, via C, the total distance would be 2 units, which is less than the current value of shortest distance discovered to D, D[D] = 5. So, we reduce the value of D[D] to 2. This reduction is also called as “Relaxation“. With that, we’re done with vertex C. 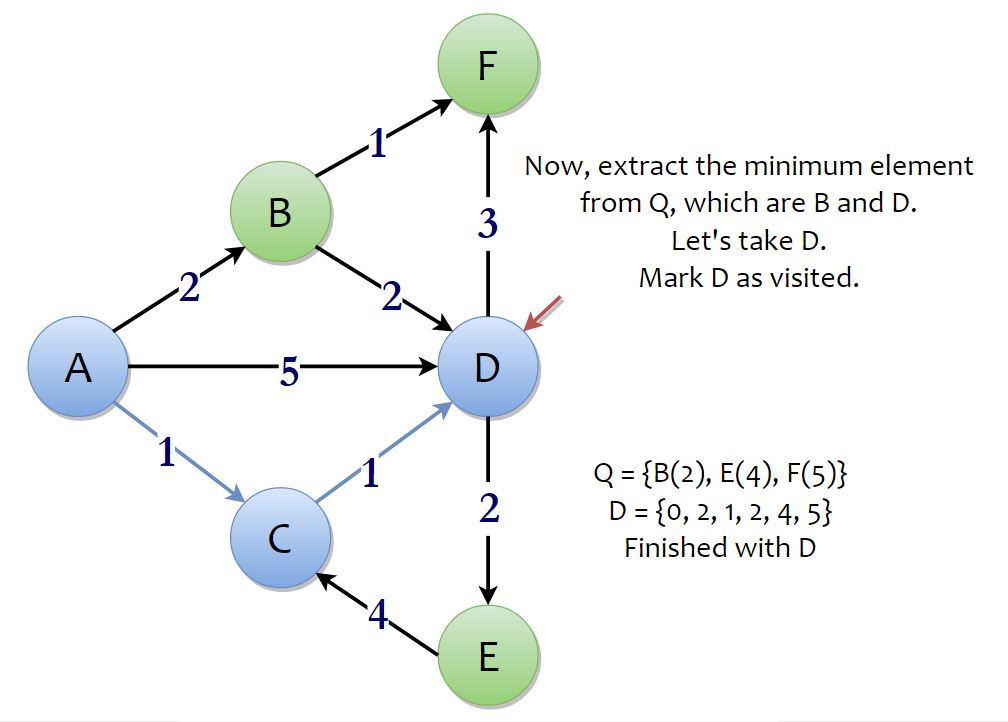 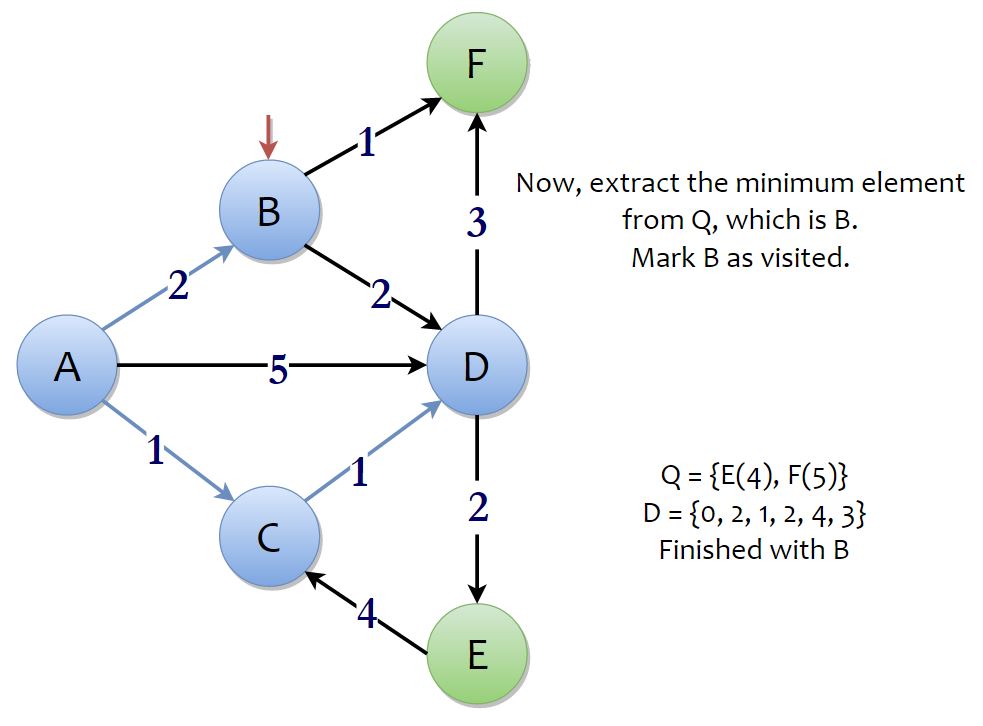 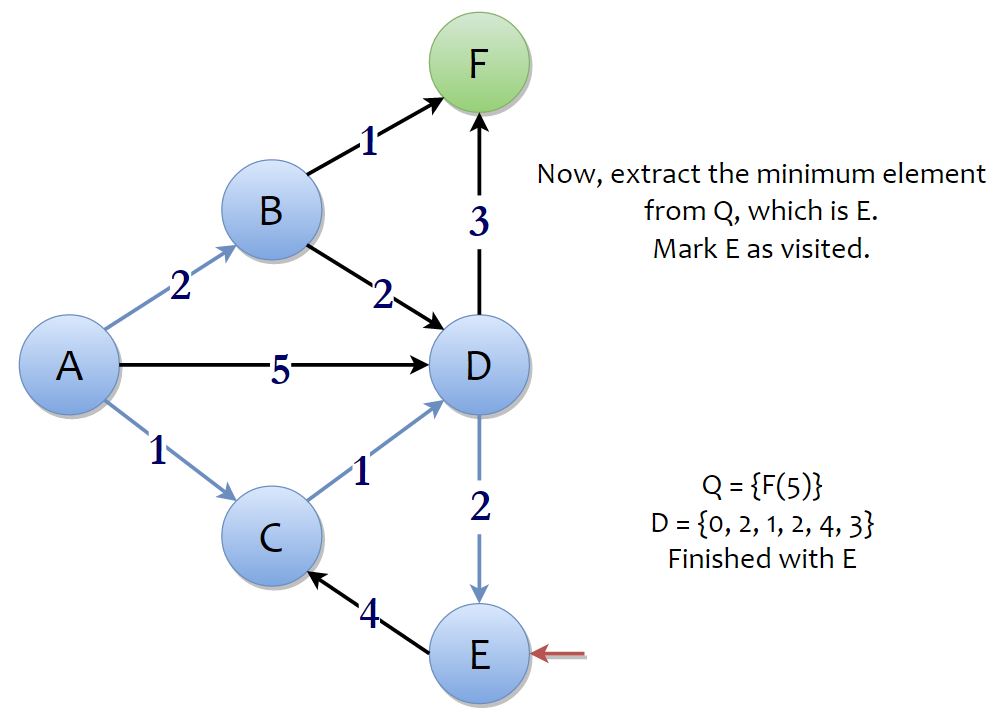 Now, the process continues to its next iteration and we extract the minimum element from the priority queue. The minimum element in the priority queue is vertex E. From vertex E, you can reach vertex C in 4 + 4 units of distance, which is more than the current value of D(C), 1. This route is not considered as it is clearly proven to be a longer route. With that, we’re done with vertex E. 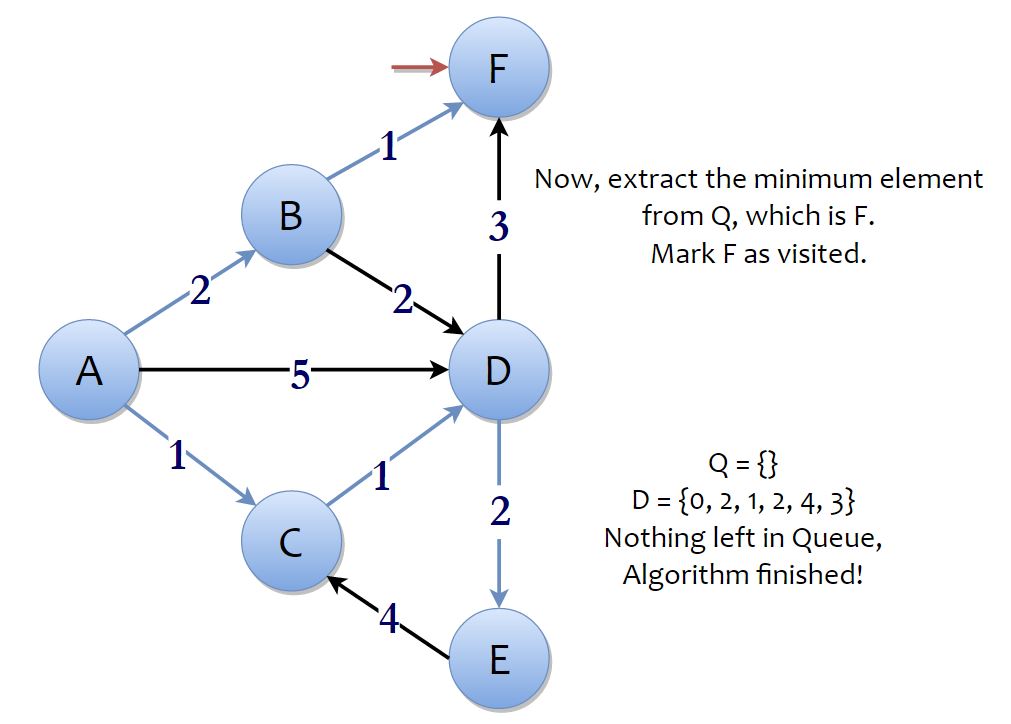 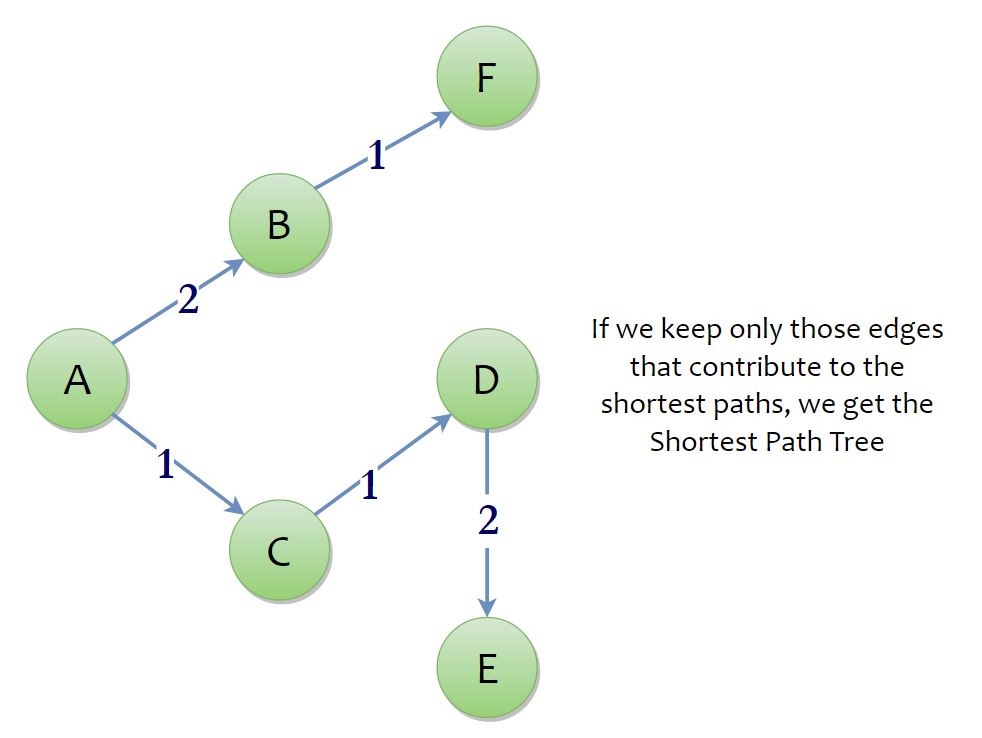 With the removal of vertex F, our priority queue becomes empty. So, our algorithm is done…! You can simply return the array D to output the shortest paths.

Having got an idea about the overall working of the Dijkstra’s Algorithm, it’s time to look at the pseudo-code –

In the pseudo-code, G is the input graph and S is the starting vertex. I hope you understand the pseudo-code. If you don’t, feel free to comment your doubts. Now, before we code Dijkstra’s Algorithm, we must first prepare a tool, which is the Priority Queue.

If you choose to implement priority queue simply by using an array, you can achieve the minimum operation in O(N) time. This will give your algorithm a total runtime complexity of O(|V|2). It is the simplest version of Dijkstra’s algorithm. This is the version you are supposed to use if you quickly want to code the Dijkstra’s algorithm for competitive programming, without having to use any fancy data structures. Take a look at the pseudocode again and try to code the algorithm using an array as the priority queue. You can use my code below as a reference –

You can use a binary heap as a priority queue. But remember that to perform the decrease-key operation, you’ll need to know the index of the vertex inside the binary heap array. For that, you’ll need an additional array to store a vertex’s index. Each time any change is made in the binary heap array, corresponding changes must be made in the auxiliary array. Personally, I don’t like this version but I’ll put my code below so that you can use it as a reference.
If you want to do the same thing in C++, you can use a priority queue to reduce a lot. The tweak here is that because you cannot remove a certain vertex from a C++ STL priority queue, we can re-insert it with the new lower priority. This will increase the memory consumption but trust me, its worth it. I have put the codes for both versions below.

The complexity of the above codes is actually O(|V| + |E|) ✗ O(log |V|), which finally makes it O(|E| log |V|). Dijkstra’s Algorithm can be improved by using a Fibonacci Heap as a Priority Queue, where the complexity reduces to O(|V| log |V| + |E|). Because the Fibonacci Heap takes constant time for Decrease Key operation. But the Fibonacci Heap is an incredibly advanced and difficult data structure to code. We’ll talk about that implementation later.