Alpha-beta pruning is based on the Branch and bound algorithm design paradigm, where we will generate uppermost and lowermost possible values to our optimal solution and using them, discard any decision which cannot possibly yield a better solution than the one we have so far.

We will try to use α and β to prune our search tree by skipping choices which can’t possibly give us a better solution. Let us understand this with the help of an example. Look at the sketch below – 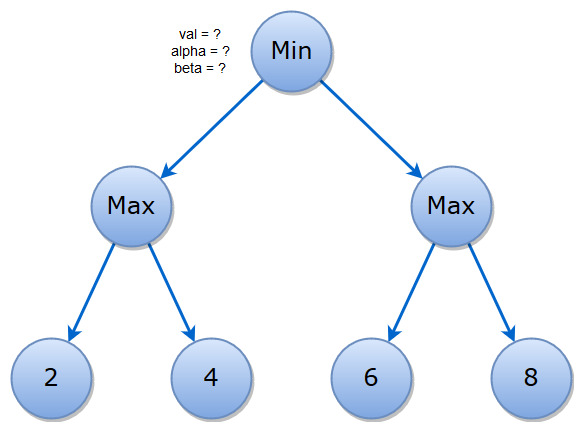 Let us assume we have the above game tree formed by two agents (max and min) playing a hypothetical game. Here, the Max agent tries to maximize the score and Min agent tries to minimize the score. Now, for a normal Minimax algorithm, we would traverse all these nodes, but this time we will send the values of α and β.

The choices for Max are 2 and 4. Since Max always maximizes the score, it will choose 4. So we update the value to be returned to 4. Notice that the value of α = 4. α denotes the best possibility for Max so far. It doesn’t play a big role here, but you must have an idea on when to update α and β. Now, we return value 4 from the Max node. 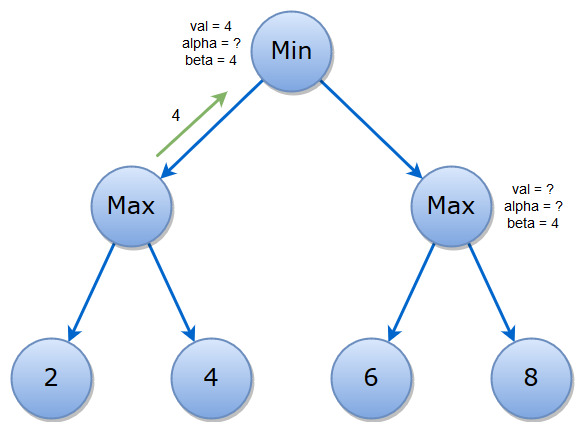 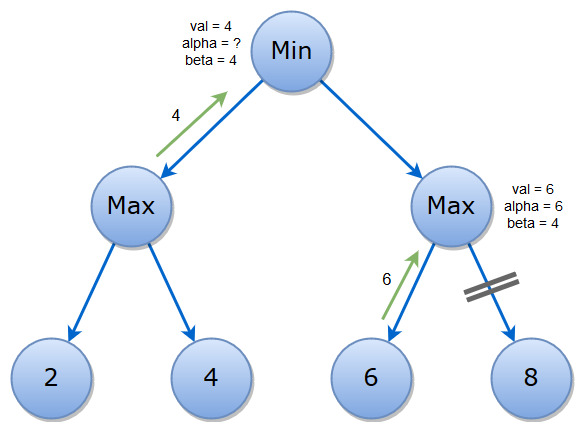 This is important! Now, this is the case when Max has finished reading the first possibility which is 6. Remember, it hasn’t gone to the next possibility (which is 8) yet!

So no matter what the next value Max encounters, it cannot affect the decision of Min. How did Max node know Min already has a choice which yields 4? From the value of β!

Read the above case again and again if you didn’t understand it. If you’ve understood it then you’ve learned Minimax algorithm with alpha-beta pruning! 😉

So, we break further computation in Max, and return 6. 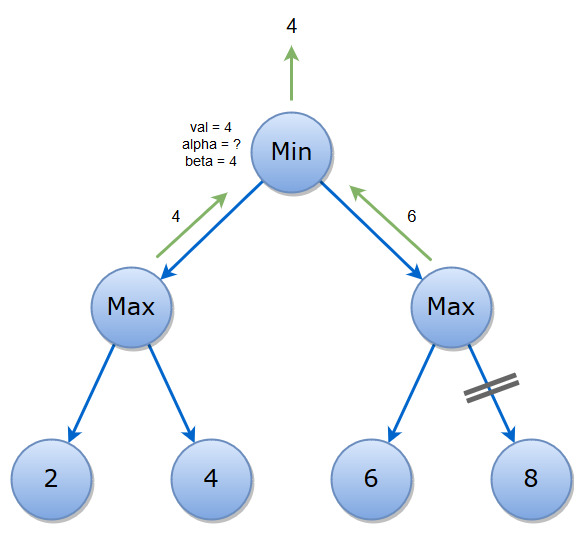 So we have managed to prune a node. This is a small example, but for a real-world scenario we would be able to prune a lot of nodes, especially when we hit the best solution earlier.

The pruning happens for these cases –

We know that pruning happens only in the above stated two cases. So the only modifications we need to make to our existing Minimax algorithm pseudo-code is that,

So, now instead of 1 if condition, we have 3 if conditions in our methods. The order of the new conditions can be interchanged, I like to write it this way.

Now that you have the pseudo-code, can you use that to tell which nodes get pruned for the example below? 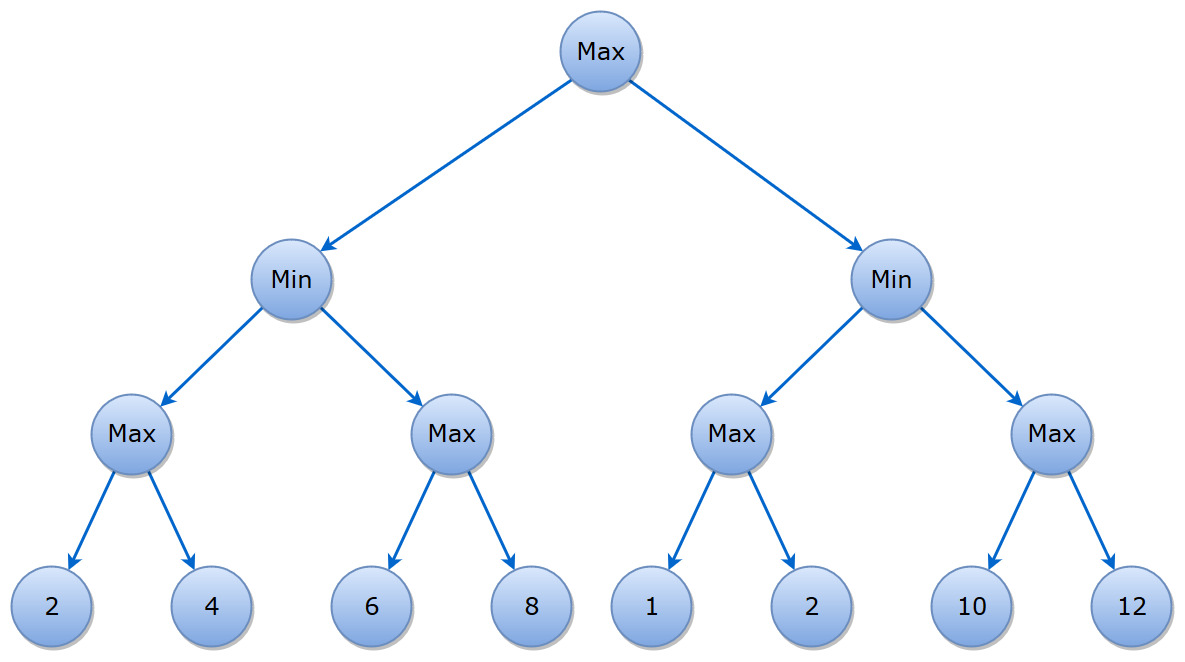 Take 2 minutes, it is easy. When done, check your answers with mine – 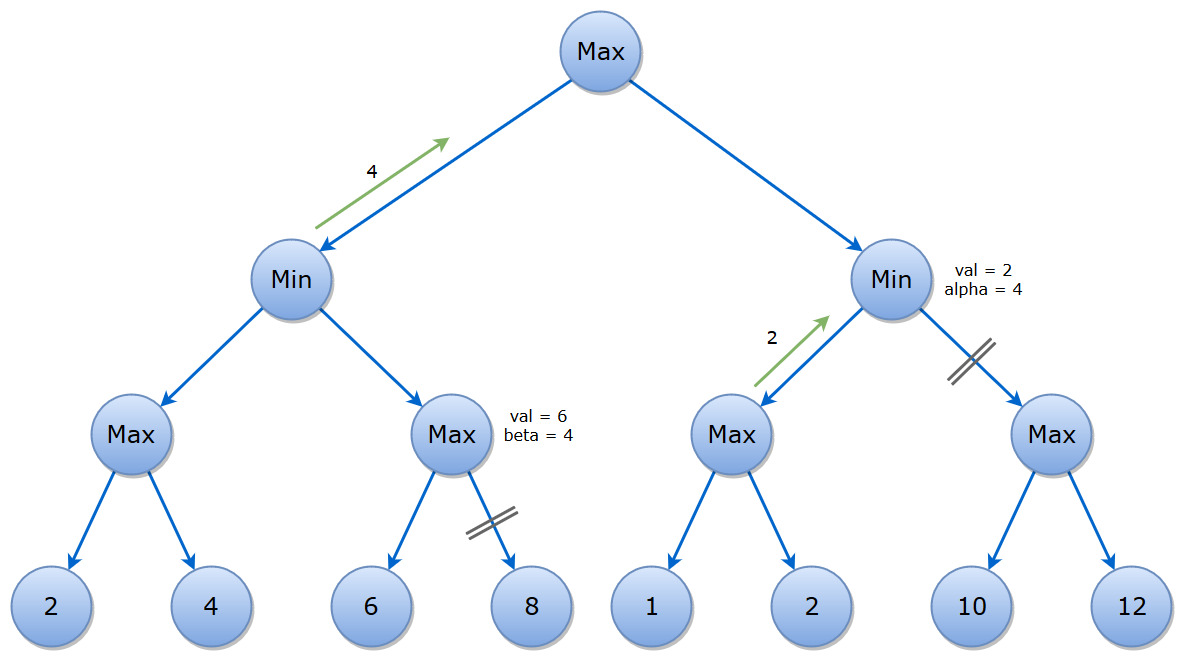 Did you get them right? If yes kudos! If not, you just have to try one more time. I’m sure you’ll get it! 🙂